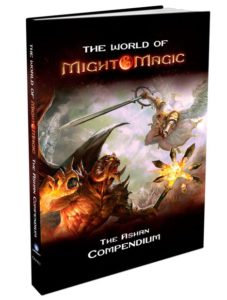 “The Might and Magic compendium is a lavishly illustrated, hardback guide to the world of Ashan, the setting for twenty-five years of Might and Magic games. Featuring exclusive artwork, stories, and fun facts, much of the content from the book is drawn directly from the Developer’s Bible, the internal documents used by the game designers to keep track of timelines and plot developments. The book is divided into nine sections, examining the nine key factions, their history, abilities, rulers and major strengths and weaknesses. Also included is a history of the world of Ashan, presented as a timeline that covers all of the major events in the world’s history, from the background to the very first game up through to the modern games. This book is a complete guide to the world of Ashan, its gods, its people, and its history.”

Edited by Samantha Bailly, the compendium was a compilation of texts from the games’ bible. Most of them were originally written by Erwan Le Breton, Richard Dansky, Jeff Spock and Kurt McClung, while I wrote some extra content for the book, especially in the section dedicated to the Fortress (dwarves) faction.